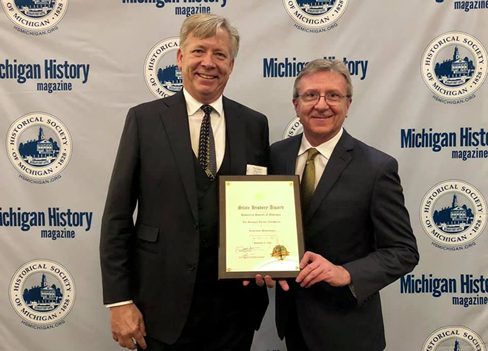 LANSING, Mich.—The Historical Society of Michigan announces its 2019 State History Awards, which were presented September 27, 2019 during its annual Michigan History Conference. The Society presents the State History Awards every year to individuals and organizations that have made outstanding contributions to the appreciation, collection, preservation and/or promotion of state and local history. The awards are the highest recognition presented by the Historical Society of Michigan, the state’s official historical society and oldest cultural organization in Michigan.

Among the winners in a dozen different award categories was the Michigan Theater Foundation’s historically sensitive renovation of Ann Arbor’s State Theatre. There was only one State History Award given in the category of Restoration/Preservation.

The State Theatre in Ann Arbor opened in 1942. Audiences loved the building’s pleated brick façade; the brilliant marquee; and its classic Art Deco touches designed by the renowned early 20th Century architect C. Howard Crane. As times changed, the State Theatre struggled to compete. It was remodeled, and in 2013, it was slated for conversion into an office building. At that point, the Michigan Theater Foundation stepped in and conducted a multi-million capital campaign to rescue, renovate and restore this classic cinema theater. The State Theatre was renovated by the O’Neal Construction Company, with design assistance from Quinn|Evans Architects and theater consultant Paul Richardson. The State Theatre reopened to the public on December 8, 2017.

The Michigan Theater Foundation wishes to thank the Ann Arbor Historical Foundation for nominating the State Theater for this prestigious award.