After years of preparation and planning, O’Neal Construction has begun re-construction of The Central Farmer’s Market at Greenfield Village! The historic market, known as the ‘Vegetable Building’, was originally constructed in 1860 on what is known today as Cadillac Square in Detroit. This central market represented the transition from Detroit being a port town to a city. Farmers were now coming to Detroit to sell to city residents rather than shipping produce to eastern cities. The building thrived as a vegetable market through the 1880’s. The emergence of the Eastern Market, and the continuing desire to open the street to traffic, led the Common Council to decide to close the Central Market in 1892. 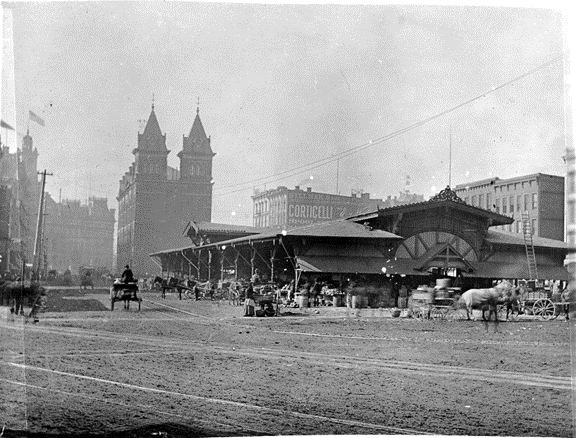 In 1894 the building was deconstructed and moved to Belle Isle where it transformed into a riding stable. Major modifications were done to the building including the addition of brick walls and clerestory windows. After the riding stable was closed in 1963, the Detroit Mounted Police used the building to keep horses and later for storage. In 2003, The Henry Ford Museum carefully dismantled the original building, cataloged each piece, and preserved them for future construction in Greenfield Village. The time has now come for this historic Detroit structure to be re-built for all to see and enjoy!